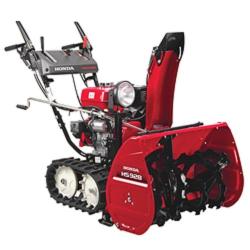 Snowblowers are a great tool for those in northern climates, but they tend to sit around unused for months at a time after the winter season has dumped its last major snowfall. That long period without use can lead to some problems with the snowblower at the start of the next winter season, especially in terms of old fuel and other fluids. Before the first snow of the season, it’s important to tune up the snowblower and make sure that it’s in excellent shape to handle snowfall from storms of any size.

Getting Started: Check the Fuel Bowl for Old Gasoline

While weathermen might claim to be able to predict the weather, the truth is that no one quite knows when the last snow of the season will fall. That means there’s never a good time to drain the fluids out of a snowblower and prepare it for storage, and many homeowners unfortunately neglect to complete this process entirely. Then, at the start of the next season, most snowblowers house aging fuel that’s at least six months old. That’s not good for the engine, or for operation, and it can even prevent the snowblower from starting.

In order to fix this problem before it leads to larger winter headaches, homeowners need to perform some preventative maintenance. Start by turning the snowblower over so that its intake chute is on the ground. This will reveal the fuel bowl, which is secured to the underside of the snowblower with a simple bolt. That bolt should be loosened and the fuel bowl should be gradually released from the snowblower. A small amount of fuel may linger inside, and it should be cleaned out thoroughly. Older snowblowers may feature corrosion around the top of the fuel bowl. This is not necessarily a problem, though excessive corrosion can weaken the seal and necessitate replacement of the fuel bowl entirely.

Be Sure to Drain the Snowblower’s Fuel Tank

After the fuel bowl has been cleaned, it’s time to disconnect the fuel tank from the snowblower and drain it of any lingering gasoline that remains from the previous winter season. This process is relatively quick; homeowners will need to make sure that they have a container to hold the old fuel, otherwise it will leak onto the ground. Once all of the fuel has been drained successfully, it’s time to move on to the next step.

The fuel line that runs between the fuel tank and the carburetor can often hold residual gasoline from the previous winter season. This can be pretty tricky to get out of the snowblower without the right tools, so homeowners should find an air pump that can gently blow through the fuel line.

After you locate a proper air pump, blow air into the end of the fuel line nearest the fuel pump. The fuel should drain out of the line on the side of the snowblower closest to the fuel tank. The same container used to catch the fuel tank’s gasoline should be used to contain leftover fuel from the fuel line. Homeowners should be sure to use very gentle puffs of air, rather than high-pressure bursts. More gentle air will ensure that the gasoline drips out neatly, while large bursts of air will force the gasoline to fly out of the line and onto the ground.

Reassemble the Snowblower and Get Ready for Winter

Once the snowblower’s old fuel has been completely removed, the equipment needs to be reassembled. That means attaching the fuel bowl and ensuring a tight seal; homeowners will also need to reattach the fuel line to both sides of the snowblower, and reassemble the fuel tank. Fresh gasoline can then be added only after the first snow of the season has actually fallen.

No matter the snowblower manufacturer, the best way to ensure smooth operation is to use OEM replacement parts whenever something must be repaired or replaced. That’s because OEM parts are made by the same company that manufactured the snowblower itself. Their quality level is generally higher than off-brand replacements, and they often come with similar warranties and quality assurances as the full equipment does upon purchase.

To Find OEM Replacement Parts, Use a Parts Lookup Tool

Shank’s Lawn Equipment offers a parts lookup tool that makes it very easy to find the right OEM replacement parts. The tool allows customers to narrow their search by brand, equipment type, and model number, ensuring that every part they buy is made exclusively for the snowblower currently sitting in their garage or tool shed.

With an exclusive commitment to OEM parts, Shank’s Lawn Equipment is easily the best resource for consumers who want a long-lasting, highly functional snowblower that can withstand even the harshest winter conditions.

If you are in the Washington County, MD or Berkely County, WV area, stop by Shank’s Lawn Equipment, where they can help you with any of your snowblower replacement parts or repair questions.

This entry was posted in Uncategorized and tagged Maintenance, Shankslawn, Snowblower. Bookmark the permalink.