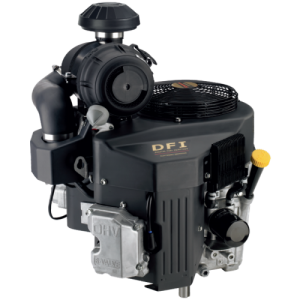 Without a doubt, the largest line of engines built by Kawasaki is its FX series for heavy duty landscaping jobs. The FX series represents the company’s most powerful line of v-twin engines, and also represents its most technologically innovative series of engines to date. The company has long been a promoter of high efficiency, with each of its “F”-series engines focusing on efficient operation that beats the competition. With the innovative FX line of engines, however, Kawasaki takes it just one step further. This line of engines is designed to not only be highly efficient, but is also designed to produce far lower emissions than any other engine produced by Kawasaki or its competitors. For those landscapers who know they’re involved in an inherently “green” occupation, this should come as a pleasant, high-powered surprise from the company.

The FX series is more than just a highly efficient, low emissions engine, however. In fact, it’s the most powerful line of v-twin engines the company currently sells, and each engine offered under the FX label is designed to endure heavy duty landscaping jobs that cover vast amounts of terrain — including rough or uneven landscapes.

Key Features and Details: Where the Kawasaki FX Series Makes a Difference

The FX series of engines by Kawasaki features compact, 90-degree v-twin combustion chambers. Each engine employs overhead v-valve technology that is specifically designed to cut down the engine’s emissions while increasing its horsepower output and the smoothness of its operation. Simply put, the FX engine is one of the few models on the market that can actually increase the engine’s power without making the operator feel as if they’re being jolted for the entirety of their time spent using the equipment. It’s a refreshing change of pace, and something that many competing engines don’t yet offer.

To further promote smoother operation and efficiency throughout a task, the FX series comes with a twin barrel, internally vented carburetor. That’s paired with a dual stage canister air filter, ensuring that long jobs, big debris, and high power, won’t foil a big landscaping task even under the most challenging conditions. A large capacity fuel pump is included with every model and, when combined with the highly efficient engine, ensures that refueling will be done in between tasks, rather than in the middle of them.

Nine different engine models are included as part of Kawasaki’s FX series, making it easily the broadest line of engines the company offers. Horsepower increases with each model, as does efficiency. At the high end, Kawasaki’s FX1000V-DFI model can produce 37 horsepower. That puts virtually every other Kawasaki engine to shame, as well as many competing models from other manufacturers.

Blowing Past the Competition: The Competitive Advantages of the FX Series

Honda and Kohler both produce engines in the range of Kawasaki’s FX series, but neither company has the commitment to low emissions that can be found at Kawasaki. While both Kohler and Honda tout their engine efficiency, they produce relatively higher emissions and offer a less comfortable riding experience during major landscaping tasks. That’s generally due to the differences in technology between Kawasaki models and the company’s nearest competitors.

Briggs & Stratton offers a competing line of engines sold under the company’s Vanguard brand, and they might be considered the most able competition for the Kawasaki FX line. They produce slightly less horsepower, however, while expelling more CO2 than the Kawasaki models. That’s a lose-lose scenario in many cases, and sets up Kawasaki for a major victory in the high-powered, v-twin engine market.

Landscaping professionals know quite well that the engine can make the job. A noisy, jolted engine, is not one that will create an enjoyable day’s work. Neither is an engine that has low fuel economy and relatively low fuel storage. The Kawasaki FX easily fixes all of these issues and brings higher efficiency, lower emissions, and better fuel economy to major landscaping jobs. The engine’s innovative technology allows it to be more powerful than virtually every one of its competitors, and its higher level of fuel efficiency means more continuous work without interruptions and mechanical problems.

Kawasaki has been producing engines of all sizes for more than 115 years, and the company’s record of success clearly extends to its modern line of v-twin engines. The FX series of engines will provide a smoother, more eco-friendly landscaping business. It will change the way you do your job. It will change how much you enjoy your job. How would you take advantage of these benefits?

Since 1984, Shank’s Lawn Equipment has provided thousands of people with the best outdoor power equipment on the market. If you’re in the Chambersburg, PA, Williamsburg, MD or Falling Waters, WV, area and need service for your Kawasaki FX Series Engine, be sure to stop by Shank’s Lawn Equipment. Or, visit them online at www.shankslawn.com, to order parts for your Kawasaki FX Series engine.

This entry was posted in Uncategorized and tagged FX Series, Kawasaki. Bookmark the permalink.