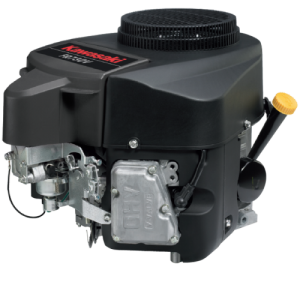 On a hot summer day, there is probably no task more uninviting than landscaping or mowing the lawn. This yard maintenance task doesn’t have to be so onerous, however. With the right engine, any riding mower can easily get the job done while its operator soaks up the sun and enjoys a smooth ride from start to finish. In most cases, today’s landscaping experts are increasingly choosing Kawasaki’s FR series of engines to power their riding lawn mowers during summer’s hottest months. The engines are far more efficient than competing models from other major manufacturers, and they’re easily more affordable. Kawasaki remains the value leader when producing compact engines for power equipment, offering a product that is easier to buy, easier to own, and less likely to need repairs over the course of its lifespan.

The Kawasaki FR series of engines is designed to get big jobs done, and it features forced-air cooling that will make sure even the hottest summer day won’t throw a wrench into landscaping activities. Lawn mowing has never been this enjoyable — or this efficient. Kawasaki’s latest batch of engines has earned it a spot atop the industry.

The FH Series of Engines: Details and Key Features

Kawasaki’s FR engine series is the company’s leading line of two-cylinder engines. To get the best combination of power, performance, and efficiency, the company has produced all five of its FR series engines with v-twin architecture. That architecture is then backed by up forced air-cooling on all five models, allowing them to operate under extremely challenging or intense conditions without faltering or overheating.

Despite their relatively high amount of power, the FR series of engines is actually quite light when paired with power equipment. The company’s lower-end models, which are smaller and more compact, weigh less than 81 pounds. The higher-end models, which pack more power and performance into a similar-sized package, weigh in less than 90 pounds. This light weight increases their efficiency and improves their overall fuel economy.

Horsepower for this line of engines is equally impressive. The lowest-end model, branded the FR541V, produces a whopping 15 horsepower. From there, the horsepower ratings only increase as each of the five engines cranks up available power. At the high end, Kawasaki’s powerful FR730V model can put out 24 horsepower during a typical amount of work. That’s simply not seen in many of the company’s competing engines, largely because no other company produces as wide a range of engines as Kawasaki does.

Kawasaki has been in the heavy industry business for over a century, and has used that long period of experience to build some of the best engines on the market. The models in its FR series of engines compete directly with the Honda GX line of v-twin engines. Those engines are certainly compact, and even lighter than Kawasaki’s models in some cases. But they’re simply not as powerful, nor are they as efficient to use for long tasks and more demanding terrains. Honda produces a good product, but it simply is not able to compete with Kawasaki’s more advanced designs and its inclusion of higher horsepower output without increasing energy usage overall.

Briggs & Stratton, for its part, produces a long Vanguard line of v-twin engines that are also designed to compete with Kawasaki’s FR series of engines. The company certainly wins points on the amount of horsepower its engines produce, but Kawasaki again beats Briggs & Stratton when it comes to efficiency. Furthermore, forced air-cooling is a mainstay of Kawasaki engines.

A Powerful Engine that Can Get Big Jobs Done Easily

Many consumers likely think that Briggs & Stratton is the market leader when it comes to selecting a powerful and efficient v-twin engine. That perception might be because the company sells more engines than virtually any other one of its competitors, but it would be the wrong impression. Briggs & Stratton wins on size and scale of its distribution, but cannot compete with Kawasaki’s quality and overall efficiency. The FR series of engines is easily the best combination of power and performance on the market. The relatively lower cost of purchase is an initial benefit, while the lower cost of ownership over the course of the engine’s lift is an added perk for most commercial business owners. When it comes to providing the right combination of instant value and long-term durability, Kawasaki beats the bigger names in the industry without so much as a concerted effort.

Next time an engine needs to be bought or replaced, be sure to consider the Kawasaki FR series. Their forced air-cooling will make every job easy to complete, even on the hottest days. And efficient use of fuel and oil will result in low ownership costs for as long as the engine remains in use. With improvements like that, who would possibly pick one of the competing options?

Since 1984, Shank’s Lawn Equipment has provided thousands of people with the best outdoor power equipment on the market. If you’re in South Central, PA or the Cumberland Valley area, and need service for your Kawasaki FR Series Engine, be sure to stop by Shank’s Lawn Equipment. Or visit them online at www.shankslawn.com, to order parts for your Kawasaki FX Series engine.

This entry was posted in Uncategorized and tagged FR Series Engine, Kawasaki. Bookmark the permalink.