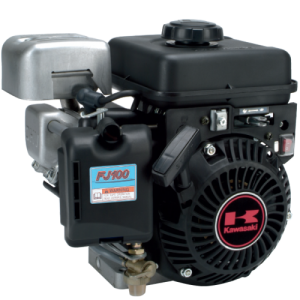 Kawasaki is no stranger to great engine power, as the company routinely produces some of the best motorcycles and all-terrain vehicles on the market. But not all of the company’s engines are big, powerful machines. Indeed, Kawasaki leads the marketplace when it comes to producing compact engines that can power all types of small power equipment. From riding lawn mowers to push models, and other types of outdoor equipment, Kawasaki’s FJ series of engines provides a smooth, operator-friendly experience that easily outpaces the competition and proves just as durable, long-lasting, and enjoyable, as anything the other big names in engine manufacturing can produce.

The FJ series specifically focuses on maintaining a low profile, adhering to eco-friendly standards, and producing enough horsepower to get tough jobs done. This might sound like an unlikely combination, but Kawasaki manages to deliver on all three points in ways that the competition has not yet mastered.

The FJ Series of Engines: Details and Key Features

The FJ series of engines, produced by Kawasaki, makes sure that no power equipment owner is left behind. The company has dedicated itself to providing models with a four-stroke horizontal shaft, as well as several models with a four-stroke vertical shaft. The series of four-stroke vertical shaft FJ series engines comes with an internally vented carburetor as well as a dual element air filter, ensuring that it operates more smoothly and efficiently than many competing engines. It’s certainly the most efficient small engine in this category produced by Kawasaki.

All of the company’s FJ series engines produce between 2.5 horsepower and 3.0 horsepower, making them well suited to everyday tasks as well as more demanding jobs in industrial applications and larger outdoor environments. And each single-cylinder FJ series engine holds just under a half-liter of oil, making it extremely portable and durable without being weighed down by extra fluids.

Competition and Competitive Advantage: How the FJ Series Competes with the Rest

The Kawasaki FJ series of engines is easily the most powerful and efficient line of single-cylinder engines currently on the market. This is remarkable in and of itself, but is even more impressive when the competition is fully considered. The company’s chief competitor for market share when it comes to imported compact engines is likely Honda, a company that has long been known for producing the same impressive motorcycles and all-terrain vehicles that have helped make Kawasaki a household name.

Honda primarily sells its CRF line of four-stroke, single-cylinder engines to consumers looking to power their equipment. It boasts that they are powerful and efficient, and they are. But Kawasaki FJ engine series edges Honda out ever so slightly when it comes to truly compact engines with big performance. Both companies are more than able competitors, but Kawasaki’s FJ series has an added edge among small landscaping jobs that comes from being developed and deployed more recently than Honda’s CRF series of engines.

Kawasaki’s FJ series of compact engines also competes with several other big names, including America’s own Briggs & Stratton. Briggs & Stratton is the world’s largest engine supplier, and carries some clout. It’s compact engines are perfect for smaller landscaping and mowing jobs, and they put out plenty of power.  However, Kawasaki wins major points on efficiency. These competitors are evenly matched in every other quality, but the FJ series’ efficient build makes it a more suitable option for small-time landscapers and mowers.

Japan-based Kawasaki has been producing engines and heavy equipment for more than 100 years, having been founded in 1896. In that time, it has made a name for itself as one of the most strident companies producing next-generation, efficient engines and other products. It continues that tradition with its FJ series of engines, focusing on delivering impressive horsepower without using significant amounts of fuel or oil. Additionally, the company continues to make major progress when building its engines, combining 21st century technology with 20th century internal combustion.

For smaller power equipment that is designed to do small or medium-sized jobs, the FJ series of engines is probably the best choice for most consumers. Kawasaki’s products continue to define the industry’s overall direction, especially as the push for eco-friendly engines moves from automobiles to power equipment and maintenance. If a new engine is looking like a required purchase, it’s time to consider Kawasaki.

Have you recently made the switch to Kawasaki’s more efficient products? If so, what has surprised you the most about these small and mighty single-cylinder engines?

This entry was posted in Uncategorized and tagged FJ Series, Kawasaki. Bookmark the permalink.