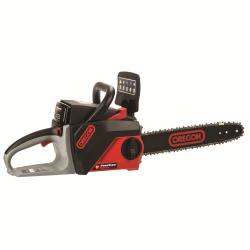 Chainsaws are thought of as noisy, heavy, awkward pieces of equipment that most homeowners go out of their way to avoid. Oregon is working to reverse these ideas with its CS250 chainsaw, powered by lithium-ion technology. Instead of gas-powered engines and eco-unfriendly fumes, the chainsaw is quiet, uses a rechargeable energy source, and is quite a bit lighter than the more traditional chainsaws currently on the market. It’s a natural fit for homeowners, and it might just change the way people react when something requires a chainsaw for clearing and outdoor renovation. Professional landscapers might find that the CS25 is their biggest competitor in times like those, for several reasons.

Great Features: The CS250 is a Unique Approach to Chainsaws

The average chainsaw is powered by gasoline and lacks any kind of electrical ignition mechanism, meaning that a start can only happen after repeated pulls on an included ripcord. Luckily, this is not the case with the battery-powered, all-electric Oregon CS250 chainsaw. Instead of repeated pulls on a starter grip, the chainsaw has instant-on features via its included battery. Simply push the “on” button and the chainsaw comes to life. When it does so, however, things will be a bit different than they are with today’s more standard chainsaw models. The CS250 is actually completely quiet when it’s not cutting through logs and limbs around the home. The equipment only registers any truly audible noise when cutting is in progress and even then, it’s pretty quiet. In fact, Oregon advertises that its CS250 chainsaw is four times quieter than more conventional models during active cutting work.

The competing chainsaw models are the market tend to cause a great deal of operator fatigue during larger tasks, since there’s only so much ergonomic design that can sit alongside a very loud, very vibration-heavy gasoline engine. The CS250 chainsaw doesn’t suffer from these constraints. Its more modern engine reduces the total overall vibration level, while an innovative and more ergonomic design separates the handle from the engine in a way that drives down operator fatigue even during long cutting jobs. The result is a chainsaw that reduces the risk of repetitive stress and related injuries, keeping homeowners safe as they get the job done.

Another common headache among the broader chainsaw market is the requirement that blades be removed, sharpened, and replaced, on a regular basis. With the Oregon CS250, that concern is eliminated. The company has a unique blade sharpening system that it calls “PowerSharp.” PowerSharp technology allows the blade to be sharpened without removing any chains and without dislodging the blade itself. It uses the chainsaws built-in engine to make that happen, and the company advertises as a result that blades can go from dull to sharp in as little as three seconds. That’s an unprecedented advantage among more traditional chainsaw models on the market from competing manufacturers.

How to Get the Job Done: Oregon CS250 Chainsaw Specifications

The goal of Oregon’s CS250 is to make chainsaws more accessible, more ergonomic, but no less powerful. That end of the bargain is largely upheld when looking at the specs of the CS250. The chainsaw weighs just 11 pounds when paired with the smaller, 1.25 Ah battery pack. Upgrading to the slightly larger 2.4 Ah or 4.0 Ah battery packs will increase that weight only by a pound, to a total of 12 pounds. This is quite a bit lighter than other models, and is one way that the company reduces the potential for fatigue during extended chainsaw use.

The CS250 chainsaw comes with a 14-inch cutting bar, which is the perfect length for use around the home. The PowerSharp blade system comes with a 3/8-inch pitch and a 0.050-inch gauge, which is standard among most residential models. For the ultimate in operator convenience, the CS250 has an automatic chain oiling system that makes it fear easier to simply pick up the chain saw, press the instant-on button, and get started with maintenance work. When the blade isn’t under any stress or any measurable load, the included engine sends the chain along at 2,350 FPM. Speeds may vary when the chain encounters a workload, as should be expected of any model.

The CS250 chainsaw is an innovative product for today’s homeowners, with a lithium-ion battery power source that doesn’t reduce the equipment’s cutting capacity substantially. Its quiet operation and lighter overall weight make it a natural fit for today’s homeowners, and Shank’s Lawn Equipment has a full selection of Oregon products in stock to ensure that those in south-central PA and surrounding areas can get their hands on these exciting models. In addition to new Oregon chainsaws like the CS250, ShanksLawn.com offers easy access to OEM replacement parts via a search tool that filters by model number and manufacturer for quick selection and assured compatibility.