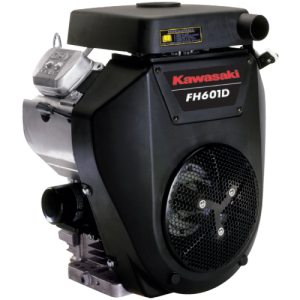 When it comes to completing big jobs in commercial industries, business owners look for an engine that provides more than a single-cylinder model like those used in lawnmowers and other vehicles. Instead, most commercial business owners are looking for something that can produce in excess of the 16 horsepower produced by consumer-targeted engines. The competition in this market is pretty tough, and includes big-name manufacturers from around the world. Kawasaki is one of those manufacturers and, with its FH series of engines, the company produces one of the best products on the market.

The Kawasaki FH series of engines comes in four distinct models, all able to produce great horsepower and get the job done better than competing engine brands on the market. Commercial and industrial business owners will want to give this line of engines a serious look before they take on another big task.

The Kawasaki FH Series of Engines: A General Overview

Most homeowners use power washers, lawn equipment, and other devices, that need no more than 16 horsepower for a typical job. Those single-cylinder engines are great for smaller tasks, because there is typically less real estate to maintain and power through than there is in commercial industries. Those commercial industries, however, are typically not well-served by smaller engines. It can make power washing larger buildings into a major hassle, and it can turn everyday landscaping and maintenance into an all-day affair.

Kawasaki recognized this and was one of the first companies to embrace “v-twin” technology for its commercial line of maintenance products. These engines are far more powerful than their residential counterparts, combining 90-degree crankshafts and forced-air cooling, as well as other industry leading technologies, that boost efficiency and power at the same time.

Key Features of the Kawasaki FH Series of Engines

With the Kawasaki FH series, the company was looking to create an engine that was compact, efficient, and powerful. It has largely accomplished that goal. All of its FH models weigh between just 94.8 pounds and 96.8 pounds, making them exceedingly compact. All four also feature horizontal crankshafts with a force air-cooled, four-cycle engine. These dual-cylinder engines are capable of producing 675 cubic centimeters of displacement, with a compression ratio of 8:1:1. That’s impressive, and it’s something that most competing models from major manufacturers simply cannot deliver as effectively as Kawasaki has managed to do.

Each dual cylinder engine comes with cast iron cylinder lines, making it highly durable and efficient throughout a wide variety of tasks. That will minimize overall maintenance costs while enhancing the engine’s longevity; in business and commercial environments, this combination is typically considered a win-win. When combined with the hemispherical design of the engine itself, buyers will be treated to a highly efficient model that will save them money on fuel, oil, and maintenance, and last them long into the future. It’s the kind of commitment to quality that has made Kawasaki a leading vendor of compact commercial engines.

A Look at the Competition: How Kawasaki Beats Them All

While Kawasaki is easily the leading manufacturer of smaller engines for commercial industries, it is certainly not the only one. The company competes with some of the biggest names in manufacturing. Many of the competitors offer engines that are far less efficient than the models produced by Kawasaki within its FH series of engines. That can spell trouble for businesses when it comes to both maintenance and fuel costs, and that might make these engines a tough sell for businesses that have a strict budget that they need to follow. While there is certainly strong competition, but these manufacturers miss the mark in terms of efficiency and smooth operation. This is one area where Kawasaki has really excelled.

A Great Line of Products for Commercial Business Owners

The FH series of engines produced by Kawasaki are among the best engines currently on the market for commercial businesses. Their large amount of power is backed up by a compact design, efficient operation, and excellent build quality that make them the most durable engine on the market. Their longevity is enhanced by all of these factors, and businesses will find them to be a great value for any large job.

While a number of Kawasaki’s competitors are trying to outdo them in terms of size, power, and efficiency, they have yet to produce an engine that can compete on all three fronts as well as the company’s FH series does. Existing owners of the FH series are invited to share their stories, as well: How has this compact engine changed the way things get done on a daily basis for your operation?

This entry was posted in Uncategorized and tagged FH Series, Kawasaki. Bookmark the permalink.