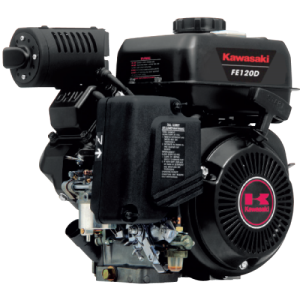 When most people hear the name “Kawasaki,” they almost immediately think of motorcycles. And that’s for good reason: The Kawasaki brand produces some of the most powerful motorcycles, and motorcycle engines, available anywhere in the world. Its commitment to raw power and efficiency means that Kawasaki is often able to compete with even bigger names like Harley-Davidson and others. But the Kawasaki name isn’t all about speeding down a highway; indeed, Kawasaki also produces a highly efficient line of medium-sized engines for vehicles like golf carts and smaller vehicles, the FE Series.

Known for its commitment to innovation, performance, and efficiency, the company has produced one of the best medium-sized engines available anywhere. Its focus on an enjoyable ride, minimal emissions, and long-term durability, means that the company’s FE series of engines is easily the best value from any manufacturer. And, best of all, the engine itself will slip away from the outside world as it runs quietly, efficiently, and smoothly.

The Kawasaki FE Series: A Look at the Engine’s Origins and Goals

As with every engine manufactured by Kawasaki, the FE series was designed with a specific use in mind. The company set out to create the leading medium-sized engine for smaller commercial vehicles. Building on its success powering both major motorcycles and smaller commercial equipment, like lawn tractors and power washers, the company eventually designed the most efficient medium-sized engine on the market.

Given the “FE” label upon release, the FE series of engines was unveiled to the public in two models. It maintains this dual-model structure today, with its FE120D and FE170D models. With varying levels of power and performance, each engine meets the needs of a different customer or vehicle, while maintaining the company’s focus on smooth operation and efficient production of power.

Under the Hood: A Look at the Two FE Series Engines Produced by Kawasaki

Kawasaki currently produces two models under the “FE” moniker. The first is its FE120D model, which is considered the entry-level engine in this category. It’s a four-cycle, force air-cooled engine with a single cylinder. Its displacement rating stands at 124 cubic centimeters, and its rated compression ratio is 8:5:1. At 32 pounds, this engine is a great option for smaller vehicles and those that don’t need to travel at higher rates of speed around a company’s location or even a typical golf course.

The higher-end model produced by Kawasaki is its FE170D model. It comes with many of the same features and performance ratings as its entry-level counterpart, but definitely produces more power. The FE170D is a four-cycle, force air-cooled engine, as well, but comes with a higher displacement rating of 171 cubic centimeters. Its compression ratio remains the same, while its weight increases to 37 pounds in order to support a more powerful piece of machinery inside. This engine is perfect for vehicles on the larger end of “medium,” as well as vehicles that need a bit more speed when they’re on the move.

How the Kawasaki FE Series Wins: A Look at the Competition

Kawasaki’s FE series of engines is definitely not the only competitor in the marketplace when it comes to powering medium-sized vehicles in business and natural environments. Many competitors produce engines that are just as big and powerful, but are far less energy efficient.

While many competitors produce powerful engines, only Kawasaki effectively combines environmentally-friendly technology, compact size, and a smooth operator experience. That makes the FE series an easy choice for most businesses and golf courses.

Typical Kawasaki: The FE Series is a Powerful, Efficient Choice

The FE series of engines combines Kawasaki’s trademark commitment to power with its new focus on environmentally-friendly operation. That’s a major benefit for anyone in need of a medium-sized engine, but the company goes even further. With innovative styling and manufacturing, Kawasaki has created an FE series of engines that gives a very smooth ride at any rate of speed — no matter which of the two engine models has been chosen to get the job done.

Until the company’s competitors come up with an engine that can be as smooth and reliable as it is efficient and powerful, Kawasaki will continue its rise to dominance. Where will you use this efficient, powerful engine, and how has Kawasaki won your business over its many competitors?

This entry was posted in Uncategorized and tagged FE Series, Kawasaki. Bookmark the permalink.