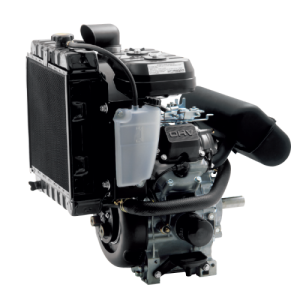 When it’s time to power a seriously large piece of equipment, few engines can compete with a high-powered v-twin Kawasaki FD Series Engine. These dual-cylinder engines are perfect for just about every big job, and they typically come in a wide variety of sizes, models, and ratings, so that commercial business owners can pick the right combination of power and price for their needs. That’s exactly how things are done at Kawasaki, where its v-twin series of FD engines is as broad as it is powerful.

Businesses in the market for a new v-twin engine to power a larger piece of equipment need look no further than Kawasaki, a brand that has proven its value in everything from golf carts to motorcycles over the course of the past century. The company’s commitment to power, value, and efficiency, is second to none. Even for these larger engines.

The FD Series of Engines: An Overview of the Product Line

The FD series of engines produced by Kawasaki uses v-twin technology and dual-cylinder construction to power some of the best engines for larger equipment. Whether that means industrial-sized mowers or power washers, or even medium-sized vehicles, these engines are suited to a wide number of tasks and are limited only by their own output and displacement. As is true with virtually every one of Kawasaki’s product lines, there are a number of engines with different features, ratings, and best uses, so that every business can have its needs met by one of the world’s leading engine manufacturers.

As with all of its engines, Kawasaki has produced the FD series with a few goals in mind. First, it must be powerful and durable. Second, it must be efficient in all scenarios as long-lasting in all environments. And, finally, each FD series engine sold by the company is designed to operate smoothly, causing minimal stress to the operator. Kawasaki accomplishes these things easily, and that makes it the leading option for many businesses in the market for a new, larger, more powerful engine.

Getting Down to Business: Features and Specifications of the FD Series

Kawasaki produces eight separate engines under the FD label, virtually all of which feature horizontal shafts. Only two models, the FD731V and the FD751V-DFI, feature vertical shafts. That’s actually notable, as none of the company’s smaller v-twin models, like those in the FH line, feature a vertical shaft. That makes the FD series both more powerful and more versatile.

At the low end, the company’s entry-level engines actually have the same displacement rating as a smaller v-twin model at just 675 cubic centimeters. That rating increases pretty quickly, however, with each higher-end model improving both its power and output significantly. The most powerful engine in the FD series, the FD851D-DFI, has a displacement rating of 824 cubic centimeters. That makes it capable of performing some serious work for commercial industries of all types.

The larger size and greater power of these v-twin engines means that Kawasaki has moved away from the force air-cooled technology of its smaller models. Each of the eight FD models offered by the company are liquid-cooled, ensuring they’ll last for quite a long time and perform efficiently under any conditions. That’s a commitment to durability and performance that many of the company’s competitors simply don’t offer.

A Look at the Competition, and Why Kawasaki is the Obvious Choice

Kawasaki competes for customers in this market segment with many of the most traditional brands in the engine industry. Kawasaki models are almost always more efficient, and consumer reviews show that there is no better engine for smooth operation than the Kawasaki FD series.

The great thing about Kawasaki’s FD series is that it combines a great amount of power with a smooth and efficient operation. There’s no need to make a compromise between these two features with Kawasaki, as some buyers do at other major brand names in the industry. The eight models produced by the company are perfect for larger jobs and commercial industries, and they’ll help boost performance while reducing the stress that can come from rougher engines with a more utilitarian way of operating.

That said, what will you find yourself doing with an engine this versatile, smooth, and efficient? The options are virtually limitless.

This entry was posted in Uncategorized and tagged Engine, FD Series, Kawasaki. Bookmark the permalink.