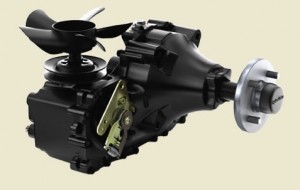 When it comes to providing commercial power equipment with just the right amount of speed and agility, few products compare to Hydro-Gear’s ZT-5400 transaxle system. Designed specifically for use in challenging commercial environments, where equipment is typically a great deal larger and more powerful, the ZT-5400 focuses on providing faster speeds, easier handling, lighter overall weight, and enhanced productivity to business owners and landscaping professionals. The transaxle follows the pattern of other Hydro-Gear products, with an innovative design and several key features that make it a great addition or replacement within any existing equipment setup.

Features of the ZT-5400: Major Benefits for Commercial Customers

One of the biggest and best features of the ZT-5400 transaxle system is its far lower number of potential leak points. This reduces the risk of damage or ongoing maintenance concerns, and it makes the transaxle a great deal easier to service throughout its useful life. The result is a system that simply requires less “attention” between uses, and one that will generally have to be taken to a local service mechanic far less often. For commercial enterprises where every penny matters and every delay affects business prospects, this low-maintenance innovation is a dramatic commitment to better, more effective work in any scenario.

The ZT-5400 also features a paper oil filter, which offers a few benefits to commercial customers. First and foremost, replacement oil filters are far more affordable to buy and use during regular maintenance. The use of a paper oil filter also ensures more effective filtration of this necessary lubricant, extending the transaxle’s life when compared to similar products on the market where a more traditional oil filter is used instead.

Because commercial equipment owners almost always find themselves driving the equipment between jobs, the ZT-5400 is one of the few Hydro-Gear transaxle systems to come with an optional transport mode. The transport mode allows equipment to travel at a far greater rate of speed, getting it between jobs more quickly. When every minute matters and every job contributes directly to the business’ bottom line, small improvements like the ZT-5400’s transport mode are a welcome addition to a rather standard list of other features and hardware specifications.

Finally, it’s worth noting that the ZT-5400 system uses Hydro-Gear’s continuously variable technology, making the ride a great deal smoother than systems without CVT included. This also means that the transaxle can be used to control both forward and reverse operation, both with pretty impressive rates of speed in most cases.

Hydro-Gear’s ZT-5400 transaxle comes with a pretty impressive specification sheet, highlighted by its ability to produce up to 700 pound-feet of torque during regular operation. That impressive amount of power is permitted by the combination of a 16cc variable displacement, seven-piston pump, and a 21cc seven-piston motor that also features variable displacement. All of the transaxle system’s power is routed through a mechanical gear reduction, as is common with other commercial and residential transaxles sold by Hydro-Gear. A single 1.375-inch shaft output is also featured, giving the equipment an edge in terms of handling the raw power produced during regular use.

Though the ZT-5400 weighs in at a whopping 57 pounds, its relatively heavy presence doesn’t bog down equipment performance or speeds. Hydro-Gear lists the maximum forward speed of this transaxle at 18 miles per hour, which is significantly faster than many of the other commercial and residential options it sells to consumers. That maximum speed can be paired with a wide range of commercial equipment options, up to a maximum rated weight of 2,200 pounds.

ShanksLawn.com Has the Parts Needed for Great Transaxle Maintenance

Shank’s Lawn Equipment has long been a destination for Hydro-Gear transaxle owners, and that’s for good reason. The company’s website features an online parts lookup tool that makes it easy to find the right Hydro-Gear OEM parts according to transaxle model number or the specific part number needed for replacement. For existing equipment owners who need to make sure their regular maintenance is easily performed, Shank’s Lawn Equipment is a great place to start when looking for the right parts for the job.

For those of you in Franklin county PA, if you have any questions about the Hydro-Gear ZT5400, come on by and ask an expert.