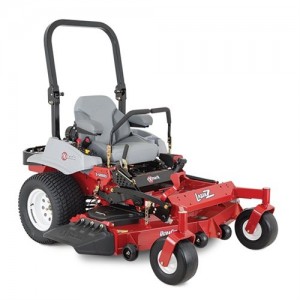 Exmark’s Lazer Z mowing system has long blurred the lines between commercial and residential mowing, and that’s definitely the case with the Lazer Z S-Series family of mowers. These riding models are designed to offer a form compact enough for demanding residential buyers, but also enough flexibility to meet the demands of small-time landscaping companies or commercial enterprises. It is for this reason that the S-Series comes in a vast number of configurations based on engine type and power, deck size, and several other considerations. Before picking out one of these innovative and powerful mowers, consider the standout specifications and features that make the entire lineup an excellent choice across the board.

A Look at the S-Series Specs for Prospective Buyers

It’s actually pretty hard to pin down just one set of specifications for the Exmark Lazer Z S-Series riding mower, since the company currently sells a whopping 14 different configurations to today’s buyers. Even so, there are some general features and specifications that remain the same regardless of the exact model being purchased. Each of the company’s riding models in this segment features a Kawasaki FX engine. The FX has long been regarded as one of the most efficient options available for larger mowers, and it’s nice to see that particular engine being used here. At the low end of the spectrum, the company’s entry-level S-Series features an FX651V that offers up to 726cc of displacement. At the higher end, an FX8801V with 852cc of displacement is offered.

Currently, the most compact of the S-Series mowers in this lineup comes with a 48-inch deck. That’s likely the maximum for residential customers and the minimum for commercial buyers, so this mower would best be described as a transitional one. Deck sizes increase from there, however, and get rather large in size. The company offers 52-inch, 60-inch, and 72-inch options for those buyers who are looking to cover a serious amount of terrain in as little time as possible. As should be expected, larger deck sizes are generally paired with larger engines in an effort to maintain consistent power across the board.

Regardless of mower deck size, each of the 14 models offered in the S-Series lineup comes with a 12-gallon fuel tank. That’s actually larger than many competing options for residential customers, and it’s certainly on par with other commercial mowers sold by other manufacturers. The equipment has a maximum forward speed of exactly 10 miles per hour, and Exmark estimates that the S-Series mower can travel in reverse at up to 6 m.p.h.

All told, the specs offered to buyers of the S-Series are impressive no matter the mower’s venue, and they allow the equipment to be used for a rather extended prior of time without interruption. For those in either residential or commercial settings, this should be considered a pretty significant victory.

The Lazer Z S-Series mower is as stacked with features as it is with impressive specifications. The large deck sizes mentioned earlier are made a great deal more adaptable thanks to the ability to either lock or unlock them during operation. An unlocked deck will work very well with uneven terrain, allowing the mower to give uneven lawns a more uniform cut overall. For those who prefer to minimize those irregularities, a locked deck will virtually hide the bumps throughout the lawn by simply not adapting to changes in the terrain.

The S-Series mower comes with Carlisle Turf Master tires, which virtually guarantees that this particular model will have superior traction when compared to options from other manufacturers. Carlisle’s Turf Master tires offer deeper treads and a somewhat unique design that grabs onto the ground and keeps the mower stable. This is even true when grass is slightly damp, or when grass has grown exceedingly long between mower outings. It’s one more way that Exmark ensures better operator safety in every environment.

Mentioned earlier, the mower’s sizable fuel tank offers a number of benefits for equipment operators. Fewer trips to the gas pump will allow Lazer Z S-Series owners to focus more clearly on the task at hand, without taking time out of the day to fill a gas container, transfer that to the mower, and then begin mowing. Further, the 12-gallon tank allows for full completion of even the largest mowing jobs without interrupting the job to let the mower cool and then refuel it as needed. When paired with the superior durability of the mower’s heavier-gauge metals and parts, buyers will spend less time on maintenance and repairs and more time on making their lawn look its best through the end of the summer season.

Whether it’s a new mower or the right replacement parts, ShanksLawn.com has what Exmark customers need. Better yet, all the parts found through the company’s lookup tool are OEM Exmark productions, ensuring their long-term dependability and quality from the start.