When consumers look for the right mower to meet their needs, a lot of concerns complicate 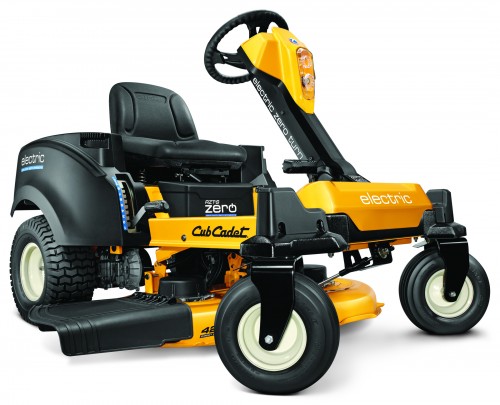 the process: Everything from oil changes to ongoing maintenance requirements and the availability of replacement parts can make it harder to find the ideal equipment for lawns of any size. Cub Cadet is making that decision process significantly easier with its innovative RZT S Zero riding mower. Unlike virtually every other riding mower on the market, the company’s latest model is entirely electric and does away with refueling, changing oil, replacing filters, and conducting extensive engine maintenance throughout the spring and summer months.

Features that Will Work for Every Homeowner

The key thing to remember about Cub Cadet’s latest, all-electric riding mower is that it’s heavy on usability. To that end, the mower requires none of the traditional wrangling over engine maintenance that its gasoline predecessors have mandated. Instead, consumers simply charge the mower in advance by plugging it into a wall outlet, and then turn the equipment on using a button. As the company’s own marketing material states, this mower delivers value to consumers largely in terms of what it doesn’t bring to the table.

Other advantages of the Cub Cadet RZT S Zero electric riding mower include its lack of fuel tanks and oil reservoirs. There’s no longer any need to worry about fuel levels, the freshness of the mower’s gasoline, or the interval of time that has elapsed since the last oil change. That also means the oil filter is a thing of the past, reducing maintenance and ongoing expenses for buyers. The electric motor also means the end of engine belts that can be expensive and time-consuming to replace.

For those buyers who are eco-friendly and noise sensitive, the Cub Cadet RZT S Zero is the logical choice. The equipment is proudly touted by Cub Cadet as being emissions-free, and its nearly silent electric motor means that there’s virtually no noise produced by the equipment when it’s turned on. For early morning mowing or late night landscaping, this mower will get the job done without bothering the neighbors with excessive levels of noise.

Electric Riding Mower Specs: All the Standard Benefits of a Cub Cadet Model

Though the RZT S Zero is the newest Cub Cadet mower on the market and has yet to be released broadly to the public, it retains many of the same features that make the company’s gas-powered models some of the most popular on the market. That includes an adjustable deck with as many as four cutting heights, ranging between 1.5 inches and 4 inches. The mower also comes with a 42-inch twin-blade cutting system, making it just as precise as similar gasoline powered models already available for sale.

To keep the mower running throughout even the most extensive landscaping jobs, Cub Cadet has paired it with a 48-volt quad-battery system totaling 92 amp hours of continuous use. That equates to a minimum of 60 minutes of uninterrupted mowing, making this mower perfect for smaller and medium-sized lawns. After the work is done, the RZT S Zero riding mower can be plugged in to recharge. From an discharged battery, the process takes between 10 and 16 hours to complete. As with many of the company’s other zero-turn models, the RZT S Zero Electric has Four Wheel Steering manuverability with a steering wheel making it very simple to operate.

Cub Cadet has no shortage of awards in its history for its gasoline models, but this electric, zero-turn mower is taking the industry by storm and racking up its own series of accolades. Perhaps the biggest award received to date has been the Breakthrough Award, issued on behalf of Popular Mechanics. The popular magazine issues the award to products that demonstrate the highest level of innovation and excellence, and its past recipients have included everyone from Apple to Nintendo and General Motors. In giving Cub Cadet the award, Popular Mechanics cited the emissions-free, low-noise operation and the promising future of the company’s zero-turn mowers in an all-electric reality.

Consumer Reports heaped plenty of praise on the RZT S ZERO electric Zero Turn Mower as well. The publication, which is notoriously skeptical of new products and claimed features, chose the Cub Cadet model as one of its top picks largely because of its easy maintenance requirements, lack of harmful emissions, and overall quality.

The RZT S Zero Electric Can Only Be Found at ShanksLawn.com

Shank’s Lawn Equipment is the only dealer in the Tri-State area to offer this innovative Cub Cadet mower. Consumers looking to radically change how they mow their lawn and how this process affects the environment, their neighbors, and their own well being, should get in touch right away to learn more about the mower’s features, its availability, and how it can transform home landscaping.

Since 1984, Shanks Lawn Equipment has provided the Chambersburg and Fayetteville, PA area with expertise in Cub Cadet outdoor power equipment. If you are in the area, stop by and check out the Cub Cadet RZT S ZERO electric Lawnmower for yourself.