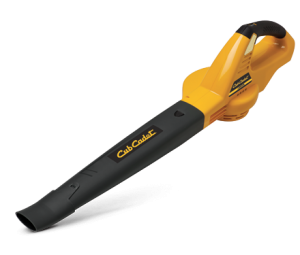 Cub Cadet offers a great lineup of lithium-ion equipment models that drop the gas-powered engine in favor of battery technology. The company’s HB59L blower is one of the models that benefits from the company’s extensive research into battery design, recharging, and overall efficiency. Unlike competing models with more traditional, two-cycle engines, the HB59L blower is quieter and tends to cause less operator fatigue due to smoother operation.

The blower sacrifices no engine power or wind speed, however, and stands alone as one of the most powerful models on the market for residential buyers who want the best combination of eco-friendly features, operator comfort, and operation quiet enough to get the job done even on a weekend morning. Those considering the HB59L model should consider how its features, quality, and Cub Cadet durability, could work for their needs wherever outdoor clearing and cleanup is needed.

The Specs: What Does the HB59L Blower Offer for Residential Buyers?

Perhaps due to the earliest lithium-ion power equipment models released some time ago, many homeowners expect that they’ll have to compromise overall power and performance in pursuit of battery-powered benefits. This may have been true in the past, but it’s no longer a requirement for those interested in today’s newest models. The HB59L therefore competes well with fellow battery-powered models as well as traditional, gas-powered options. The blower comes with an overall wind speed that maxes out at 100 miles per hour, and the equipment produces a 135 cfm overall volume that will get the job done capably even in slightly larger outdoor areas. Two-speed operation is included with this model, which makes it easier to customize speed and velocity based on outdoor area, the type of debris being cleared, noise concerns, and other operator considerations.

The HB59L blower lasts for quite some time on a full charge, and is also one of the fastest models to recharge when compared to the competition. The equipment comes with a capable, 20-volt battery that charges in between four and five hours. Since most homeowners will use the equipment for several hours and then recharge overnight, this charging time is hardly a consideration. The equipment’s ability to instantly swap batteries further ensures that a 4-hour recharge time is not a major problem for the typical residential customer.

Cub Cadet’s equipment is generally appreciated not only for its power and durability, but also for the thoughtful features and designs that make it stand out from the competition. The HB59L cordless blower should be considered no exception to this long-standing rule. The equipment’s chief selling point is, in fact, its lithium-ion battery. The omission of a traditional engine also removes several factors from regular operation: excessive noise and vibrations. Instead of waking up the neighbors and risking repetitive stress injuries, those who opt for this model will enjoy significantly reduced noise and a far lesser level of vibration transmission from the engine to the handle. This means that earlier or longer use of the equipment will be no problem for the average homeowner.

Further enhancing the equipment’s operator-friendly features is the soft-touch rubber handle that comes with every HB59L blower. This handle not only feels very comfortable to the touch, but also absorbs any lingering engine vibrations that might still be produced by the battery and engine. As a result, the equipment has little overall impact on operator fatigue or energy levels, and should be considered a safe option for continuous use during even the longest clearing and debris cleanup jobs outdoors.

The HB59L cordless blower does not come with a battery or the charger required after each use. Instead, consumers must purchase these separately as accessories. Cub Cadet offers a single, 20-volt battery model that fits with all of its most recent lithium-ion models. In turn, this battery fits into a “universal” charger that can return the battery to a full charge from empty in just over four hours. Because the battery and charger are separate from the equipment, buyers are free to purchase several batteries that can be swapped during operation if the job outlasts the battery’s included charge.

Where to Buy Cub Cadet HB59L Cordless Blowers and Parts

Customers who are looking to round out their handheld power equipment with a battery-powered blower should look no further than Shank’s Lawn Equipment. Whether in-person or at ShanksLawn.com, the company offers the full lineup of Cub Cadet’s lithium-ion models as well as the batteries, chargers, and other accessories that make them easy to use and even easier to maintain. Shank’s Lawn Equipment is a great local resource for south-central Pennsylvania homeowners, though its location along Interstate 81 ensures that those in West Virginia, Maryland, and Northern Virginia are also within range of great equipment, parts, and expert service.