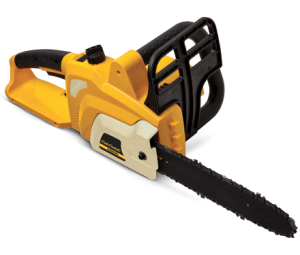 Cub Cadet has long been one of the most respected names in power equipment, and the company’s reputation for producing some of the most powerful residential and commercial models is hard to match. Cub Cadet, however, is about more than the traditional two-cycle or four-cycle engine that’s found with most smaller power equipment tools available to today’s consumers. In recent years, the company has been working on perfecting lithium-ion battery technology so that it offers comparable power, a long working duration between charges, and a fast recharging cycle when the battery requires it.

One of the products to come out of this research is Cub Cadet’s CS59L cordless chainsaw. Designed to compete with more traditional, gas-powered options already available, this cordless and compact chainsaw offers plenty of power without the noise, emissions, and hassle that often accompanies two-cycle engine models.

Features: How the CS59L Works for Today’s Consumers

The biggest and most obvious feature of Cub Cadet’s CS59L is its ability to use a lithium-ion battery pack instead of a more traditional engine powered by gasoline. This battery is a big feature, but it also adds a few compelling benefits to the mix: First and foremost, the CS59L produces dramatically less noise than its gas-powered counterparts. The chainsaw is also quite a bit better for operators who use it for extended periods, since the battery-powered engine produces far fewer vibrations than a more traditional chainsaw would.

As with any power equipment option, however, the CS59L chainsaw does produce at least a bit of vibration when working through cutting jobs. The good news is that Cub Cadet has given this model a soft, rubber-coated handle with an ergonomic design. Smartly designed to offer comfort and protection, this handle absorbs engine movement and ensures that operators are less fatigued during extended use of this Cub Cadet model. A safety lock further enhances operator integrity, and makes sure that bystanders won’t accidentally injure themselves if they come across the chainsaw in storage or elsewhere.

Cub Cadet’s attention to detail extends beyond operator fatigue and overall safety. The company has made sure that the chainsaw’s battery is removable. This makes it easy for operators to purchase multiple batteries and do a fast swap if one runs out of a useful charge. Furthermore, it means the useful life of the chainsaw is not limited by a built-in battery, and it means that no expensive maintenance will be required in order to maximize charging capacity and longevity.

A Quick Look at the CS59L Cordless Chainsaw’s Specifications

As should be expected of a Cub Cadet chainsaw, the CS59L model comes with plenty of longevity and power to get the job done. The chainsaw is paired with a 20-volt lithium-ion battery that can charge from empty to full capacity in just over four hours. The battery lasts considerably longer than its charging time in active operation and, if it runs out of a charge, the battery can be removed and instantly replaced with a fully charged, second battery. The chainsaw features a large, 10-inch cutting bar, which is perfect for smaller chainsaws in this category.

To make operation just a bit easier, Cub Cadet’s CS59L chainsaw comes with an automatic oiler that reduces the need for preventative oiling before every cutting task. This also ensures that the chainsaw is easier to maintain, and likely to last a bit longer even if it’s used heavily throughout the year. Reduced maintenance concerns are certainly a benefit for first-time chainsaw owners or those who are new to homeownership and outdoor maintenance.

Available Accessories Include Batteries and Chargers Necessary for Portable Power

The accessories available for the CS59L chainsaw included additional 20-volt batteries and a required battery charger. It’s worth noting that this model does not come with any batteries included, nor does it come with the charger required to bring the batteries back to full capacity after use. These must be purchased separately. The good news, however, is that authorized dealers across the country carry an extensive lineup not only of Cub Cadet equipment, but also the accessories that allow for better charging and portability for lithium-ion battery models.

For many consumers, the time has come to transition away from gas-powered handheld tools and toward quieter options powered by battery technology. Cub Cadet’s CS59L chainsaw is a powerful chainsaw and a compelling option for those looking to take the plunge and leverage the quieter, easier operation of lithium-ion battery technology. Shank’s Lawn Equipment serves customers throughout central and southern Pennsylvania, northern Virginia, central Maryland, and even West Virginia, with a superior selection of Cub Cadet products and OEM parts. The CS59L can be found at Cub Cadet, with a selection of OEM replacement parts that will make maintenance concerns even easier to address.