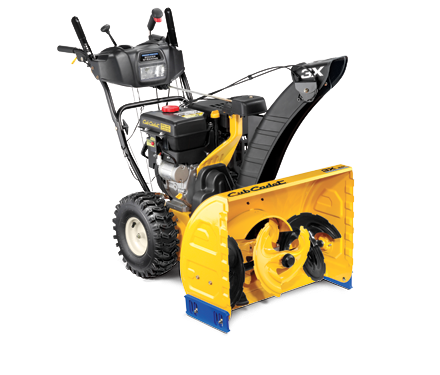 The goal of virtually every homeowner throughout the winter is to clear snow as quickly and as effectively as possible, with minimal time outside and minimal effort put into the process. Luckily, Cub Cadet seems to agree with those exact same ideals. The company has gone above and beyond the standard two-stage snow blower, offering a series of three-stage models that it brands the Cub Cadet 3X Series. These snow blowers were created with efficiency in mind, and the company proudly brags that they can get the job done in roughly half the time required by even its own two-stage snow blowers of all sizes.

The 3X Series: Big Features that Make a Real Difference

Perhaps the most refreshing feature of the Cub Cadet 3X Series is its ability to be turned on with just the push of a button. All of the company’s available models feature electric starter mechanisms that will put an end to the days of pulling on ripcords in the bitter cold of winter. This convenience is paired with self-propulsion on all 3X series snow blowers that will help homeowners power through even the heaviest snow accumulations in the dead of winter.

All snow blowers in this series come with one of Cub Cadet’s own OHV engines, offering a significant amount of power between 357cc of displacement and 420cc displacement at the high-end. The engine’s power is paired with a great power steering system, giving the snow blower a great deal of additional agility when driving that is simply easier to use than the drive systems found on competing models. Homeowners will especially appreciate this feature when they come to understand he added size and weight that comes with purchasing a more convenient, three-stage snow blower.

That three-stage operation is perhaps the biggest feature of all, of course. It allows the snow blower to do more work all at the same time, clearing more snow with a single pass that either single-stage or two-stage models typically permit. The end result is far greater efficiency, with these particular models being able to clear the same space around the home in about half the time as a powerful two-stage snow blower sold by either Cub Cadet or its nearest competitors.

The 3X Series of snow blowers was designed from the start to be a powerful alternative to midrange two-stage snow blower models. To that end, Cub Cadet has created each of its 3X models with a minimum intake height of 21 inches. Upgraded models feature even higher intakes, with up to 23 inches offered by some 3X snow blowers. That’s higher than most two-stage models and it means that more snow can be cleared in less time.

Larger intakes also mean that particularly heavy snowfall, of up to almost two feet, can be cleared by this equipment with little to no advanced preparation. Homeowners will be relieved to finally retire the snow shovels for all but the most legendary of snowstorms this and every winter.

The company’s 3X Series starts off with an entry-level snow blower measuring 26 inches wide, perfect for traditional sidewalks and driveways. For larger jobs, including bigger driveways, wider sidewalks, and even light commercial or municipal use, several larger sizes are available. The company offers a 28-inch midrange model and a high-end 30-inch model that can both clear even more snow in a hurry.

A Great Option for Today’s Homeowners

With the right amount of power and self-propulsion, even the biggest snowstorms of the winter can be a breeze to clean up. Cub Cadet has spent a great deal of time working on the 3X Series to make sure it’s a powerful way to clear 50 percent more snow in the same amount of passes as a two-stage snow blower. In addition, the company has paired the equipment with power steering, push-button electric start, and a seriously large initial intake.

That makes the 3X series the new must-have snow blower for winter, especially in areas where Mother Nature is known to relentlessly drop one or two feet of snow in just a few hours’ time. For accumulations up to 23 inches, it’s never been easier to tackle even the toughest wintry conditions.

Shank’s Lawn Equipment has an extensive collection of Cub Cadet’s 3X Series snow blowers, offering a model that can work for consumers with relatively small areas to clean as will as those who have large driveways and walkways to clear throughout the winter. Best of all, the company also offers a full selection of OEM replacement parts that will help with regular maintenance and the occasional repair as needed throughout the winter months.