Brown EdgeMaster – The Key to a Beautiful Yard 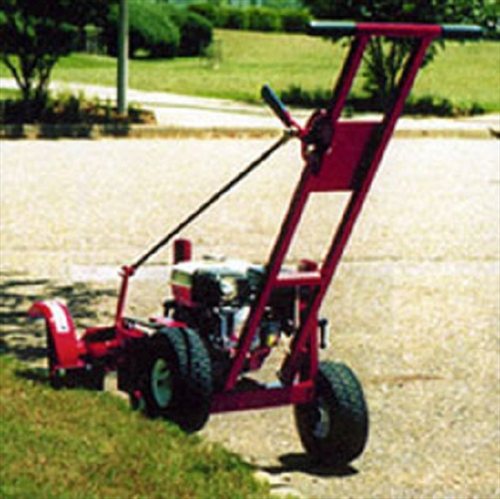 While lawn mowers are the key to healthy lawns and a neat, manicured look, they must be backed up by a number of smaller tools that can finish the details and guarantee a perfect lawn every time. One of those tools is Brown’s EdgeMaster equipment. Designed to create neat edges around curbs, sidewalks, pavement and other non-grassy surfaces, the EdgeMaster creates a nice line that separates grass from other materials and gives lawns a highly professional appearance.

Features of the Brown EdgeMaster

Brown has long been focused on creating compact power equipment that can help give lawns the perfect finishing touch throughout the spring and summer seasons, and that commitment can clearly be seen in the EdgeMaster. The equipment, though powerful, weighs in at just 115 pounds. That makes the EdgeMaster among the lightest edging options currently on the market for commercial businesses or homeowners.

The double belt drive system is paired with a double belt clutch for the ultimate in power and maneuverability. This system also helps to reduce operator fatigue during large jobs or those performed on commercial properties and helps the EdgeMaster to be more efficient overall. Further enhancing the EdgeMaster’s commitment to operator comfort and smooth operation are the four steel wheels and their accompanying pneumatic tires. This combination is unlike anything else on the market, and it sets Brown apart.

The EdgeMaster’s Specs: A Great Combination

Brown has a reputation of including powerful third-party mowers with its equipment, and that reputation has been well earned. It is extended with the EdgeMaster system, which uses a single-cylinder Honda GX system to ensure that the edging performed will be precise, easily pursued and consistently finished. The particular GX model featured in the EdgeMaster can produce a maximum of 5.5 horsepower, easily besting competing edging products.

A 10-inch edging blade gives the EdgeMaster an edge over its competition in a big way. The blade can be both adjusted and swapped out for a smaller model, giving the equipment enough flexibility to adapt to virtually any terrain, as well as to any two surfaces. It’s important to remember that edging equipment often operates between grass and dirt, grass and pavement, sidewalks and turf, and other hard materials that might be require different blade sizes.

The Benefits of a Brown EdgeMaster System

The compact size of the EdgeMaster gives it a clear edge over competing models, which can often weigh as much as 25 pounds more than Brown’s offering. While 25 pounds might not seem like a lot, it’s important to consider that the EdgeMaster will frequently be carried around a property before it can begin its edging task. Furthermore, a heavier weight simply makes the equipment more difficult to push for long periods of time. Given the lack of self-propulsion featured here, a heavier weight would be a distinct disadvantage.

Also worth noting is that the equipment’s spindle is hollow and features far larger bearings than many competing models. For those who are not in the know, that means the spindle itself will experience a great deal less wear when the EdgeMaster is in active use. Brown owners, for this reason, will find themselves replacing parts and conducting maintenance on a far less frequent basis than they would with other models.

The adjustable curb wheel found on this model makes it easy to get the perfect depth into the ground, and the perfect distance from paved surfaces, that will benefit lawns of varying types and sizes. It’s hard to find this adjustable feature on other models, and Brown should be commended for this added flexibility.

Consumers who own Brown’s EdgeMaster equipment will need to make sure that they conduct regular maintenance, including oil changes and belt service as well as replacing any parts that become worn over time. When parts do need to be replaced, the choice between OEM parts and generic parts is quite clear. OEM parts are created and approved by Brown itself while generic parts are built using non-approved methods and sketchy spec sheets.

OEM parts, for that reason, are considered more durable and highly compatible with Brown EdgeMasters than generic competitors. Their materials are generally of a higher quality than other options, giving owners peace of mind that their replacement part will last several years without causing further headaches.

Shank’s Lawn Equipment is a Great Way to Buy Brown

For several decades, Shank’s Lawn Equipment has served homeowners and commercial business owners with the right tools to get the job done outside. Whether it’s Brown’s EdgeMaster equipment or numerous other options, the company offers a wide range of OEM parts, a great number of services and technical support options.

Be sure to use the company’s experience and resources when purchasing a Brown EdgeMaster, and don’t forget that Shank’s Lawn Equipment can be counted on to have all of the necessary OEM replacement parts for Brown products. For those of you who are in the Boonsboro, Clear Spring and Hagerstown, MD area, stop by our facility and let us know how your yard equipment is holding up.