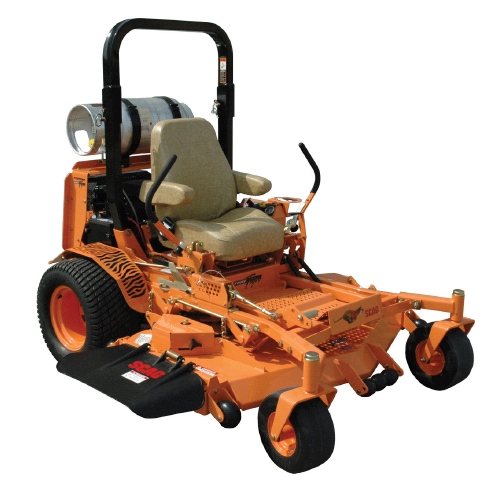 The Tiger Cat and Turf Tiger are two premium zero-turn riding mowers manufactured by Scag Power Equipment. While both models are powerful commercial-grade mowers suitable for nearly any commercial mowing task, there are differences between the two. The Turf Tiger offers added features and functionality

Both the Tiger Cat and Turf Tiger offer a variety of features that simplify the job for the operator. Both models are equipped with an hour meter, allowing users to monitor the machine’s usage and determine maintenance intervals. Comfortable suspension seats, cup holders, and electric power take off clutches are standard on both models. Safety features standard to both models include a seat actuated kill switch, parking brake, and mower engagement switch.

The Tiger Cat and Turf Tiger also come standard with Scag’s Velocity Plus cutter deck, which uses a unique design to deliver precision cutting and high-velocity discharges while the mowers operate at full speed. The decks house three Marbain blades and use an extra large discharge chute to provide this quick performance. The Velocity Plus decks come with Scag’s Custom-Cut Front Baffle System, which allows users to adjust the deck baffling to tailor the machine’s performance to the specific environment. High strength precision drive spindles are used to ensure reliability under difficult conditions and unexpected shocks.

Beyond ergonomic features and the deck construction, the Tiger Cat and Turf Tiger are highly dissimilar with the differences starting at the frame. The Tiger Cat uses a single tube frame while the Turf Tiger uses a double tube frame, doubling the amount of steel around the deck and greatly improving durability. Both models have full length, fully welded steel frames; the Turf Tiger simply has additional reinforcement.

The engine choices also vary between the two models. The Tiger Cat is available with seven air-cooled V-twin engines with outputs ranging from 25 to 30 horsepower. The Turf Tiger is available with seven other engines with outputs ranging from 27 to 35 horsepower. However, the Turf Tiger’s range includes four liquid-cooled engines including a three-cylinder 28 horsepower diesel from CAT, for those users who prefer to use diesel.

The Turf Tiger also uses a more advanced hydraulic system. Both models use dual pumps, but the Turf Tiger uses larger 16cc pumps with fans mounted on most models. The pumps are not merely larger, but include pressure relief valves, extra large input bearings and shaft, and oil coolers. The larger engines on the Turf Tiger are capable of powering the hydraulic system with a minimum of parasitic loss to the drive wheels.

There are a variety of other minor differences between the two. Instrumentation also varies; the Turf Tiger comes with an ammiter and a water temperature gauge, allowing users to keep a closer eye upon the machine’s health. The panel layout is also different, with numerous analog gauges in contrast to the Tiger Cat’s relatively sparse indicators.

The Turf Tiger is slightly longer, heavier and taller than the Tiger Cat, even with comparable deck widths. Even the fuel tanks are different between the two models. The Tiger Cat has dual fuel tanks containing a total of seven gallon of fuel above the wheels. In contrast, the Turf Tiger uses an 8.5 gallon or 11 gallon single tank that is mounted low to minimize the center of gravity and improve stability at speed. The Turf Tiger also uses nine anti-scalp wheels regardless of deck size, while the Tiger Cat uses only four or seven, depending upon the deck size.

Which Machine is Right for You?

Both models perform the same essential function. Both are highly capable commercial mowers with zero turn capability and many users would be satisfied with either. However, users who wish to have a diesel engine or users who must handle uneven terrain and expect the frame to experience daily undulations and even impacts would be well advised to select the Turf Tiger, as its improved durability will prove to be an asset over the long run.

Owners who must clear large tracts of land in a short time frame should also select the Turf Tiger. It is the only model available with a 72” deck and most models have a 12 mile per hour top speed. The 20 percent increase in top speed coupled with the larger deck size results in a substantial improvement in productivity over the Tiger Cat. With a frame designed to handle terrain at higher than average speeds, most users would benefit from the added functionality of the Turf Tiger.

Purchasing and Servicing the Tiger Cat or Turf Tiger

When looking to buy commercial mowing equipment, seek out dealers with a wide selection. Shank’s Lawn Equipment has a wide array of machinery available at low prices. When it comes time to service a Tiger Cat or Turf Tiger, owners can purchase quality OEM parts with the help of a sophisticated part identification tool. This tool ensures that the part on the page is the right part for the right machine.

Since 1984, Shanks Lawn Equipment has helped thousands of people find the Outdoor Equipment and safety gear appropriate for their needs. If you are in the Washington County, MD or Berkeley County, WV area, stop by Shank’s Lawn Equipment.