Replacing the Drive Belt of Your Snowblower 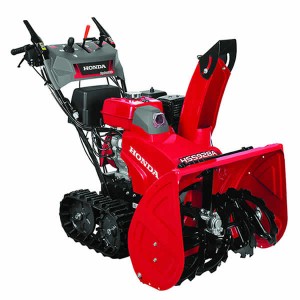 It’s that time of year again: winter’s on its way, and that means getting your snowblower ready to clear the pavement. While you’re checking the engine and blades, it’s a good time to inspect and perhaps replace the drive belt. After all, if it breaks, your snowblower won’t work, and there’s no worse time to get a new belt than in the middle of a snow storm.

This guide will walk you through the basics. To get full instructions on how to replace the belt on your snowblower, check the included owner’s manual.

Why Should I Replace the Drive Belt?

The construction of the drive belt on your snowblower is similar to the accessory belts on your car’s engine, and that means temperature changes and wear will cause the belt surface to wear down and the rubber to crack, eventually leading to failure. Manufacturers will usually specify a service interval, but it could be shortened by improper storage or unusual work conditions. When in doubt, check the belt for signs of wear.

The belt also acts as a form of protection for your engine: if you get something stuck in the auger, the belt will slip. That keeps the engine from jamming and bending the drive shaft or breaking the main pulley, but it also stretches the belt and erodes the belt face. If you’ve had a major jam, it’s a good idea to check the belt.

Accessing and Inspecting the Belt

The belt should be protected by a cover located on the outside of the auger housing, either on the sides or the back. Once you locate this cover, remove the screws holding it on, and separate it from the housing. You should be able to see most or all of the belt so you can give it a thorough inspection. If there is visible cracking or feathering, or the belt is hanging loose despite the pulleys being in place, it’s time to replace the belt.

Assembly goes in reverse order of removal: slide the new belt over the auger and tensioner pulleys, wrap the end around the main pulley, and slide that pulley onto the shaft. Make sure the pulley fits snug, lining up with the other pulleys so that the belt is traveling in a straight path. If everything looks good, slide the washers back onto the shaft and tighten down the nut. Reinstall the cover and remove the wood block from the impeller before using the snowblower.

When first using the snowblower after a belt change, start with some light duty work. The drive system should be almost silent: if you hear squealing, shut off the engine, remove the cover and check the belt alignment.

Where to Get a New Drive Belt

Shank’s Lawn Equipment is your one stop shop for all of your winter small engine equipment needs. We’re a certified dealer for most major snowblower manufacturers including Honda and Cub Cadet, and we can ship the parts you need to any address in the U.S. or Canada. To order from us, visit our website, www.shankslawn.com.

We’re more than just an online warehouse, though, we’re also a full service lawn and garden shop. Live in South Central Pennsylvania and need parts or service for your equipment? Stop by our shop located at 4900 Molly Pitcher Highway in Chambersburg, just off route 11. If you’re driving in from I-81, take Exit 10 to Marion.