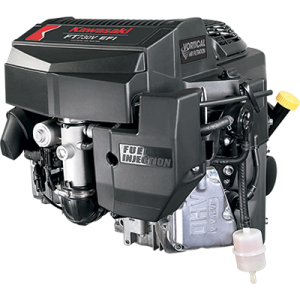 Aimed at use in high-end residential and commercial lawn mowers, Kawasaki’s recently released FT730V-EFI introduces a new air filtration system and numerous upgrades to reduce maintenance and downtime. Designed for compatibility with their other 730-based engines, it shouldn’t be long before we see this new engine in ZTR, stand-on and wide walk-behind mowers.

The big news for this engine is a new type of air filtration system that Kawasaki says can be used up to 50 hours before cleaning. It uses centrifugal flow to separate out heavy dust, grass, and other debris out of the air stream before it reaches the filter medium. Similar systems are already in use on a lot of small engines, but Kawasaki’s Vortical design can channel this material through a duckbill-shaped debris ejection valve instead of letting it get caked on the inside of the housing. Not only does this mean longer maintenance intervals, it keeps working at peak performance longer, resulting in a cleaner engine. The Vortical Air Filtration system also uses the filter and case as part of the centrifugal system, so there’s no separate pre-filter chamber that increases the overall size of the engine.

The air path for the cooling system has also been redesigned to work with this new air box. Overall, airflow has been improved across the cooling fins, and the wash-out ports have been relocated to the underside of the air filter cover. This provides direct access to the heads for fast cleaning while shielding the engine from dust when in operation.

In recent years, manufacturers have been switching from carburetors to fuel injectors to keep up with emissions regulations and reduce operating costs through improved fuel economy and reduced maintenance. While that’s reason enough to consider an EFI engine, Kawasaki’s system has another trick up its sleeve: an integrated e-governor. This device manages engine speed to meet current load requirements, keeping performance consistent when driving onto slopes or into thick grass, maintaining mower and blade speed for a higher quality finish. This all but eliminates the need for repeated passes so jobs can be completed faster.

The EFI system is an open loop design that doesn’t use an oxygen sensor, but otherwise, it resembles something you’d find in a new car. It uses multi-port injection, using an injector for each fuel runner to supply the cylinders individually. These injectors are supplied by a returnless fuel system that modulates fuel pressure to deliver the exact amount of gas needed, reducing the number of system components. The system’s ECU is in a sealed container to protect it from weather, vibration, and dirt. Head temperature sensors let the ECU keep fuel mixture and engine speed in check to prevent overheating and reduce oil consumption. It can also enrich the fuel mixture automatically, eliminating the need for a choke while making it easy to start in any weather. Repairs are easier thanks to an on-board diagnostic system that lets dealers plug a tablet or computer into the ECU for quick troubleshooting.

All this new technology is packaged in a way to give the FT the same size and shape as the previous carbureted versions, making it easy for manufacturers to switch from an FS or FX engine. The 730 block the FT is based on has been around for 10 years, so OEMs and dealers are already familiar with these engines, making the switch relatively painless.

Getting Parts and Service for the Kawasaki FT730V-EFI

Whether your Kawasaki engine is new or old, Shank’s Lawn Equipment can help you keep it running. We’re a certified dealer for Kawasaki Engines and many of the manufacturers who use their powerplants including Wright, Dixon, and Scag. If you need parts or service, visit our shop, located at 4900 Molly Pitcher Highway in Chambersburg, PA. That’s one mile East of I-81 via Exit 10. We also ship OEM parts and accessories across the U.S. and Canada. To order, visit us online at www.shankslawn.com.