How and When to Aerate Your Lawn 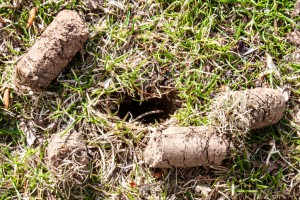 Poking holes into your lawn may seem crazy, but aeration can relieve pressure that is preventing your grass from reaching its full potential. Here’s what you need to know about choosing the equipment to aerate your lawn, the right time to do it and the right techniques to make it as easy and effective as possible.

Surface soil can become compacted due to foot or vehicle traffic. Without microscopic holes running through this dirt, roots can’t get the oxygen and water they need to thrive, and the roots of new plants can’t penetrate the soil. Aerating is the process of cutting into the soil to relieve this compaction. Aerating is needed after heavy construction and in areas that see heavy traffic. Typically, aerating is only necessary every two or three years.

How Does Aeration Fit in With Dethatching?

Aeration and dethatching are not the same process, but they can solve similar problems and are often done together. Thatch is a layer of woody plant material that gathers on top of the soil. If the lawn is in good shape, the microorganisms in the soil will break down this material rapidly. Overfertilizing, bagging, and other bad lawn care practices can lead to thatch building up faster than it can be digested, leading to buildup that can prevent water and oxygen access, just like compacted soil. For most lawns, thatch becomes a problem if it’s over ½ inch thick.

Both dethatching and aerating are usually done before planting grass seed. With the thatch out of the way, the seeds can fall directly onto the softened soil where they can take root. Dethatching first makes it easier for the aerator’s tines to penetrate the soil.

What’s the Difference Between Spike and Core Tines?

Core tines are hollow so they can cut plugs out of the soil. By removing parts of the soil, the remaining dirt can spread out. The soil plugs left behind are unsightly, but they can be mowed into smaller pieces that will blend into the turf.

Spike tines punch holes into soil, breaking up the surface to reduce compaction. However, this force compacts the walls of the hole left behind, so it’s less effective than coring. Jrco’s hooker aerators get around this by moving in and out of the ground diagonally. This pulls out soft soil instead of hard cores while minimizing compaction around the holes.

Not long ago, the aerator market was dominated by drum rollers. These heavy objects had tines that would poke through as they turned, punching holes into the ground. Weight distribution was uneven, and turning was a complicated process requiring the tines to be disengaged before lining up the aerator for the next pass. It was common for operators to simply drag the drum across the lawn, damaging the turf. Advances in technology have led to designs that eliminate these problems, making an aerator no harder to use than a lawn mower.

Exmark makes both walk-behind and stand-on aerators. The walk-behind model uses an engine to propel the machine, while weights over the tines to help push them into the soil. The tines can be lifted mechanically when it’s time to turn the machine.

A stand-on aerator uses hydrostatic drive motors to deliver zero turning radius operation, while supporting large tine reels to bust through soil quickly. These machines are far faster than walk-behind aerators, which can be a huge benefit for professional landscapers. Depending on the model, an Exmark stand-on aerator can cover between 1.4 and 1.8 acres per hour.

Looking for something between these two extremes? JRCO’s hooker aerators attach to either the front or rear of your riding mower, letting it do most of the work. These aerators use the company’s universal mounting system, which is compatible with a wide range of mowers including models from Wright, Scag, and Exmark.

The ground needs to be moist for the tines to penetrate the soil. Watering a day ahead of time will make the job faster and easier on your equipment.

Mark sprinklers before aerating. The tines move with enough force to break these underground fixtures.

Giving the soil plugs time to dry out will make them easier to mow. Cutting plugs is hard on the edges of mower blades, so plan on sharpening the blades before your next mow.

Unless you’re overseeding or helping a lawn recover from a construction project, you can save time by limiting aeration to areas that have seen heavy traffic.

Need Help With Your Aerator?

If you’re looking to buy a new aerator, or you need your current equipment serviced, visit Shank’s Lawn Equipment. We’re an authorized dealer for several manufacturers including Jrco and Exmark. Stop by our shop, located at 4900 Molly Pitcher Highway in Chambersburg, PA.

Is your current aerator due for a set of tines? Do you need something to get it running? We can ship the parts and accessories you need to any address in the United States or Canada. To order, visit us at www.shankslawn.com.

This entry was posted in Uncategorized and tagged aerated lawn, aeration, How to Aerate Lawn. Bookmark the permalink.