Cub Cadet’s 3X snow blowers are designed to be bigger and more powerful than virtually all of the company’s other options for residential users, but even this lineup of snow blo 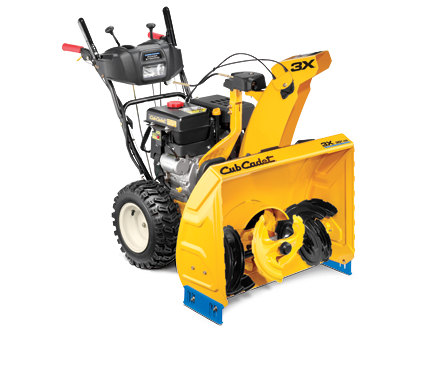 wers divides power and size into two distinct tiers. The company’s entry-level snow blowers feature 21-inch intake heights that are more than enough for most homeowners, but those in particularly snowy climates will probably appreciate the thoughtful design of the 3X HD series instead. With a slightly higher intake of 23 inches, this upgraded 3X offering is just a bit better for the northernmost reaches of the country.

The HD series is made up of two models, the entry-level 26-inch and the high-end 30-inch. Each snow blower will find a home with different types of consumer, with some key differences that really stand out. Even so, there are more similarities than differences and both options are a great way to defeat winter’s harshest weather.

The 3X HD series of snow blowers is actually pretty similar to the regular 3X lineup, with features that just make sense for clearing big winter accumulations and tackling moderately sized outdoor areas. The main features likely to draw consumers to the 3X HD lineup can be broken down into a few key components.

Getting a snow blower engine started in the kind of weather that produces up to 23 inches of snowfall is no easy task without electric start, so Cub Cadet has been kind enough to give snow blower buyers that added advantage. The system uses electric starting mechanisms to allow push-button start of the snow blower that takes just a few seconds. After that, the equipment can be freely used throughout the lawn to tackle sidewalks, driveways, and other areas with relative ease and wide-ranging freedom of movement.

Consistent across the 3X and 3X HD models is Cub Cadet’s new 3X induction accelerator, which has been designed to actually pull ice and snow into the snow blower at a high rate of speed. In fact, it generally performs this task three times faster than competing single-stage and two-stage snow blowers, thus giving the equipment its name in the first place. This means homeowners will spend less time outdoors in the snow, with up to a 50 percent overall increase in snow clearing efficiency.

Clearing snow, even with a powerful snow blower, is generally no easy task. Powdery snow can easily find its way back into cleared areas, while wet snow takes a great deal more effort to be effectively removed and placed elsewhere. The 3X HD series makes the process a touch easier with power steering. The equipment is simply easier to turn and control than it would be without this feature, and it means that even wet snow is not really a problem in most cases. Self-propulsion further enhances the ease of use enjoyed by this snow blower, making it easily roll over and through frozen surfaces without as much effort behind the handle.

Key Differences Between Each Model

The 26-inch model is noticeably smaller than the high-end 30-inch 3X HD snow blower, and that makes it perfect for homeowners with smaller areas to clean up after the storm. The 26-inch 3X HD model is great for narrower sidewalks and home walkways, smaller driveways, and other, smaller outdoor areas that need cleaning. It comes paired with a 357cc OHV engine made in-house by Cub Cadet, which is perfect for the equipment’s size and overall level of performance.

Despite its relatively large size when compared to single-stage and two-stage models, some homeowners may find the 26-inch version of the 3X HD snow blower to simply be inadequate for their needs. That’s where the upgraded 30-inch model comes in. The equipment is considerably wider than the entry-level model, allowing it to handle long and wide driveways, bigger sidewalks and walkways, and even larger open areas outdoors. The equipment is noticeably heavier in addition to its extra width, which means it requires an appropriately upgraded engine.

Unlike the 26-inch model, the 30-inch 3X HD snow blower comes with a 420cc Cub Cadet OHV engine. Though only slightly larger, the engine’s extra horsepower is noticeable and it helps the 30-inch snow blower easily power through heavy accumulations with ease. With the aid of this engine, and in combination with power steering and self-propulsion, there is perhaps no quicker or easier way to clean up nature’s mess after a big snowstorm.

For everything from new 3X HD snow blowers to OEM replacement parts for existing snow blower models, Shank’s Lawn Equipment has what customers need. With an online parts lookup tool and years of experience selling Cub Cadet snow blowers and a wide range of other power equipment models, virtually everyone can find what they need to make winter weather a bit easier to handle.

Stop by Shanks Lawn Equipment if you are in the Franklin County, PA or Fulton County, PA area – speak with a Cub Cadet snow blower expert about your snow blower maintenance or repair. We’re always happy to see you.