BCS Tiller Attachments for Every Season 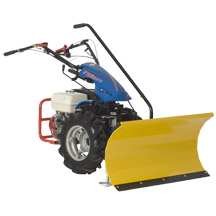 BCS is one of the most respected names in landscaping, for both home and commercial customers. The company produces a wide range of tilling and other products that are perfect for boosting the ground’s ability to grow, compost, and thrive in all seasons. Chief among these products is the company’s rear tine tiller. The BCS Tiller is popular among homeowners, and  businesses, for its ease of use and its relatively compact size. With a couple of great attachments, it’s also versatile enough to be used throughout every season.

Ease of Operation is a Specialty at BCS

Almost every tiller on the market is promised to be highly usable, easy to operate, and practically effortless to use. This may not be true for every tiller, but it’s especially true for the BCS rear tine tiller that meets with rave reviews from customers. That’s because the BCS model, unlike many of its competitors, does not require much guidance from the operator. Many competing tillers actually require the operator to press down and push forward during operation, assisting the tines as they dig deep and cultivate the ground.

The BCS rear tine tiller guides itself along the landscape and requires very little effort from the operator. The tiller also comes with as many as three speeds, with one of those speeds specially designed for cultivating the space between existing plants.

Because the BCS rear tine tiller does not require the operator to press down and push forward during operation, many consumers might assume that the equipment itself is a bit heavier. Whether that weight is added to increase the effectiveness of the tilling, or merely to compensate for additional hardware, most buyers figure it’s a necessity. That’s actually not true, though, and the BCS tiller is actually one of the most balanced units currently available for sale.

With its relatively compact size and nimble balance, the BCS tiller is an easy addition to most home and business storage sheds. The equipment takes up relatively little room and can be easily transported between areas where its powerful blades are needed most. With a wide array of attachments, the BCS tractor comes in handy during all four seasons.

A tiller is usually thought of as a springtime or summer device, with some occasional use in the fall season for those who compost. BCS turns that idea on its head, however, with two very useful attachments. The first is the company’s unique Power Sweeper attachment for the rear tine tiller. This unique attachment is exactly what its name implies: It can be used with the tiller’s engine to sweep lawns, driveways, and sidewalks, clear of debris, dirt, or even snow. This capability makes the Power Sweeper a great, year-round attachment that will benefit the landscape as much during the winter as it does during the warmer months.

For bigger jobs, BCS sells its own Front Blade attachment. This essentially amounts to a front-mounted plow or dirt mover, which can be used to level landscapes, move dirt around, or even push snow after a particularly large storm has left behind a significant accumulation. Just like the Power Sweeper, this attachment specializes in turning the company’s simple tiller into an all-seasons product that has a great deal of value when compared to competing options.

Both attachments are essential in many applications, and they make the BCS rear tine tiller one of the most impressive models currently available. Because this tiller is relatively compact, and quite a bit more versatile than the competition, it’s especially good for homeowners and business owners who find themselves low on available equipment storage space.

Where to Buy BCS Tillers and Parts

BCS recommends OEM parts only – they are durable, compatible and built with the manufacturers high quality standards. Find parts online using the user-friendly online parts lookup tool. Parts are easy to locate and shipping and ordering are easily completed online. No need to delay any repairs or much-needed seasonal upkeep.

If you are in the Cumberland Valley or Panhandle of West Virginia, stop by Shanks Lawn Equipment and speak with a BCS Expert. Not only is Shank’s Lawn an independent dealer, they provide accessories, attachments and BCS OEM parts for any BCS Tillers.

This entry was posted in Uncategorized and tagged Accessories, BCS Tiller, Shankslawn. Bookmark the permalink.