Back-Up Snow Thrower Parts You Should Keep on Hand 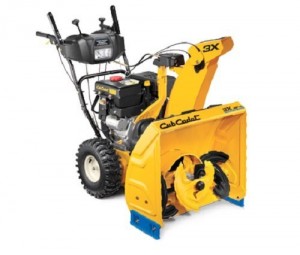 Snow throwers are designed so that common problems can be quickly repaired, but simply getting to the store to get the parts you need can be a challenge when there’s snow on the ground. Before you find yourself in this situation, get the parts you’ll need to get your thrower back in service without having to leave your home.
Keys
Do you know where the snow blower key is? Is there a possibility that someone in your household will mistake that small plastic key for a toy key? If you lose that key, do you have a spare in a safe place?

Yes, it may seem silly that snow thrower engines use universal keys, but a secure key is hardly going to keep someone from walking off with it. Instead, they serve as a safety device, allowing the engine to be shut off quickly and preventing it from being started by children.

Drive Belts
Belts stretch when used, the rubber dries out and cracks as it ages, and debris can nick the belt. Even with frequent inspections, there’s always the possibility that an errant rock or a jammed auger can put enough strain on the belt to break it.

Oil
Small engines usually don’t have oil filters, which means oil can get dirty fast. Most manufacturers recommend changing the oil after 5 hours of use in a new engine to remove any particles left from the break in process. If you bought a new snow thrower this year, you may need to do this before its second or third use. Dirty oil or too little oil in the crankcase can lead to overheating.

Fuel
Winter weather can be unpredictable, but in some ways fewer snowfalls can be worse for a snow thrower. Modern fuel goes stale quickly, which means the gas or diesel you put in your snow thrower the last time you used it may not want to ignite, keeping the engine from starting.

Fuel left over from summer is even worse because it uses a different formulation designed to evaporate less easily. While this is good for reducing emissions and vapor lock in high temperatures, it is much harder to ignite at low temperatures.

Spark plugs
The electrode on a spark plug wears down over time, and it’s easy to overlook when doing maintenance. Other common problems like stale fuel, dirty oil and clogged air filters can cause poor ignition, leaving deposits on the plug that prevent the spark from forming. Even if the deposits can be removed, it’s a lot faster to put in a replacement, letting you get the snow cleared and then clean the plug at your leisure.

Shear pins
If the snow thrower is jammed, the torque from the engine can put tremendous pressure on the drivetrain, causing catastrophic damage. To keep this from happening, the auger is attached to the shaft using shear pins. These parts are designed to break under stress, saving the rest of the snow thrower. Of course, it also makes the snow thrower inoperable until these parts are replaced. Pins should be replaced with the OEM parts specified in your owner’s manual to guarantee that they will fail when they’re supposed to.

Save yourself some frustration this winter by getting everything you need to keep your snow thrower running before you need it. Stop by Shank’s Lawn Equipment at 4900 Molly Pitcher Highway in Chambersburg, just off US Rt. 11 at I-81 Exit 10 to Marion. Not in the Mid-Atlantic Tri-State area? Visit us online at www.shankslawn.com. We ship to all 50 states.

This entry was posted in Uncategorized and tagged Shanks Lawn Equipment, Snowblower Maintenance. Bookmark the permalink.